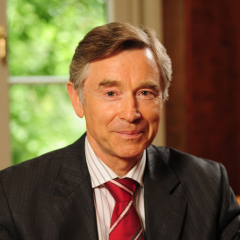 Karl Brauner has been Deputy Director-General of the WTO since 2013. Prior to that, he held the position of Director General for external economic policy in the German Federal Ministry of Economics in Berlin. During that time, he was Germany’s member in the European Union’s Trade Policy Committee taking part in all WTO ministerial conferences since the launch of the Doha Development Agenda.

He is a lawyer by profession, with degrees from Germany and the United Kingdom (Cambridge). After working as Assistant Professor at the University of Bielefeld and practising law, he started his career in the legal department of the Federal Ministry of Economics in Bonn in 1983. In 1986-87, he worked at the German Mission to the United Nations in New York. Further postings abroad were in Athens and Sydney.

At the Ministry of Economics in Berlin, his responsibilities covered a range of issues, such as budget, human resources and general administration. He was in charge of cabinet and parliamentary matters and was also involved in the move of the Government from Bonn to Berlin.

As Director General he administered for 12 years all the instruments of export promotion and was also in charge of export controls. His portfolio also comprised all bilateral economic relations outside the EU.